Posted by Henry McHenry on 10/22/2013
Posted in: Uncategorized. Leave a Comment
This is how I replaced the stock head unit on my 13′ Versa. The stock audio system is a good system, but after almost a year I wanted something with more features (most notably a touch screen). Previous to this, I had the speakers replaced with four Polk Audio Dxi 650.
After doing some research and asking a few vendors, this is what I came up with:
– JVC KW-AV61BT
– Metra Axxess ASWC-1 – OE Steering Wheel control interface
– Metra 99-7613 Dash Kit (not required, the original brackets fit just fine)
– PAC TR7 Video Bypass (also not required, JVC radios are easily bypassed)
– Metra 40-NI12 Antena adapter
– Metra 70-7552 wiring harness
– Sirius SXV200 module
– Scosche TK12 toolkit
– Fake faceplate 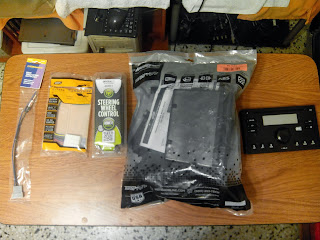 The first step was to prepare the harness. Using the couplers included with the TK12 I color matched all cables with the JVC harness. Also, I performed the power connections for the ASWC-1 harness. The ASWC-1’s Gray/Red and Gray/Blue wires were left pending as the 70-7552 doesn’t have the pins for the steering wheel controls.
This is the resulting harness: 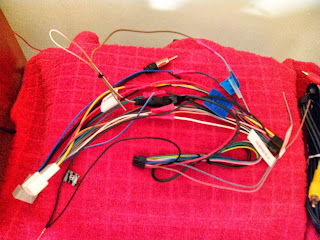 Next was remove the panel. For that purpose I used the panel removal tool. It was matter of inserting it in the let top corner. As I removed the panel I was careful with the hazard flashers switch. 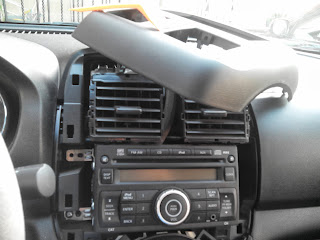 With the radio now accesible it was a matter of just removing the four screws and unplugging the cables. 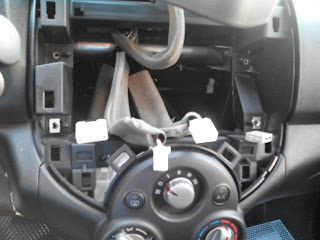 At this stage, from the car harness, I spliced cables at pins 6, 16 and 15 and perfomed the connections to gray/red, gray/blue and ground on the ASWC-1.
As stated before, the Metra 99-7613 is not required if the original brackets are available. With the excpetion of one screw on each side, the brackets fit nicely. 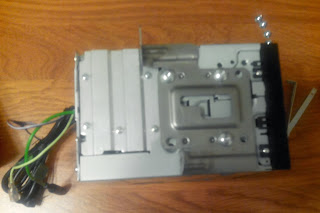 With all harnesses ready, I hooked up everything to test the radio and program the ASWC-1 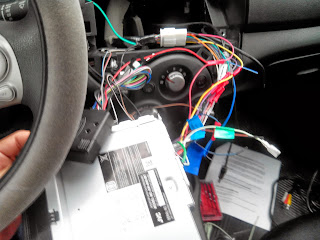 With the 13′ Versa press the igintion switch twice without pressing the brake pedal. After the ASWC-1 start blinking rapidly, press and hold the Steering Wheel Volume Up button until the unit stops flashing, after that release the button and wait for the LED to stay solid red. At that point test the volume control.
The XM unit is located in a compartment behind the glove box (plenty of room there) and I routed the cable and mounted the antenna inside the windshield on the passenger side. The reception is really good, so I didn’t have to mount the antenna outside.
I ran the microphone cable above the flashers switch. A matter of remving a small cover.
This is how it looks after I put everything in place: 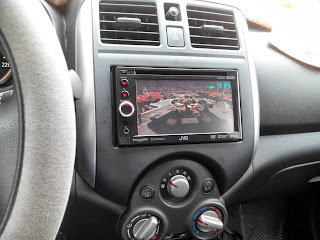 For the video bypass, I only had to ground the green e-brake cable.

As a protective meassure I ordered this fake faceplate: 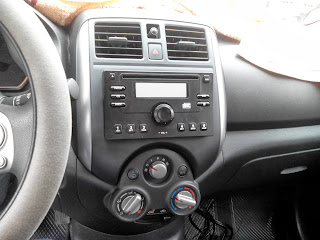 However, being a common item, it could be counterproductive to use it, so I ordered a 07 Versa OEM faceplate. I didn’t have to alter it in any way. It fits perfectly in place of the JVC faceplate. 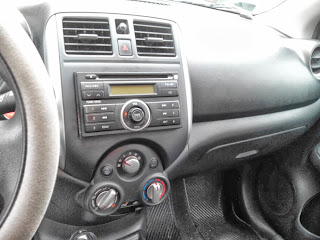 Now it looks like it still has the stock radio.

For my next projects I intend to install a backup camera and mount a Dreamcast.

Until the next time…