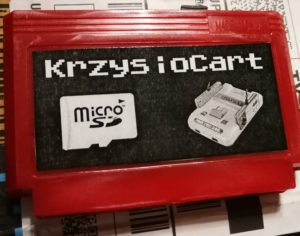 The Krzysiocart is a flashcart made primarily for the famiclone consoles. It also works on most famicom compatible hardware.

It was developed by Krzysiobal a Polish developer who was inspired by the Pegasus a famiclone popular in Poland.

It all began as a project for his tesis, then worked on ministurizing it until he got to the product he is now selling.

It is a small one man operation, you contact this guy via eail, ask for payment details, send the money then he ships it very quickly. Price is $55 USD shipped to the US. Besides the flashcart, a 4GB microsd and usb adapter are also included.

I tried it on the AVS and on a NOAC Famiclone console (SY-700) and it worked fine on both consoles.

The interface is simple, look for your file, press A then your game boots.

When you place the cursor on a rom file, at the bottom a message tells you if the rom is compatible or not.

The creator’s goal is to make a device capable of running most famiclone games at an affordable price. That said, here are some notes:

For what t is and for the price I can’t complain, it works great and still you can run a great selection of games. You can still have a lot of fun.